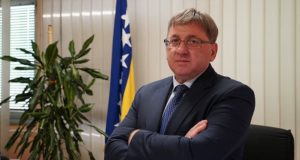 He started his work engagement in 1986 in the Srebrenica Bauxite Mine where he worked in the field of planning and analysis, financial operations and as the financial director of the company. This was followed by the duties of financial police inspector in the SDK RB&H and in the Federal Ministry of Finance. After that, he transferred to the Tax Administration of the Federation of B&H as a head of the Supervision and Training Department, and became chief Federal Inspector in the Tax Administration. He transferred his professional development and experience to the new duties as an Assistant Director of the Indirect Taxation Authority of B&H, which he held until the transfer to the position of Deputy Auditor General of the Audit Office of the Institutions in B&H (2008) where he stayed until his election to the position of General Auditor of the Audit Office of the Institutions in the Federation of Bosnia and Herzegovina, starting in February 2016.

What is important to emphasize, among other things, is the contribution that Mr. Nekić gave to the reform of the Tax Administration in the Federation of B&H in the introduction and establishment of a research and information unit led by representatives of the international community (CAFAO) as well as the reform of the transition of the sales tax system to VAT system (together with representatives of the international community-EU). With his professional experience in the Indirect Taxation Authority of B&H, he has significantly contributed to the preparation of laws and bylaws in budget planning and budget execution, then to the establishment of the Treasury Single Account, as well as in other functional establishments related to financial and human resources management.

Acting as Deputy Auditor General of B&H institutions, he focused his professional experience on financial audits, compliance audits and performance audits in accordance with the International Standards of Supreme Audit Institutions (ISSAI Framework ), and the legal and institutional framework.

In addition to his professional work, Mr. Nekić was a direct participant, as a lecturer, in many symposiums, seminars and trainings in the field of financial audit and performance audit. Also, he was an active participant in many domestic and international conferences in the field of audit and public financial management, as well as a participant in the XX and XXI INCOSAI Congress, IX EUROSAI Congress, III and IV EUROSAI-ARABOSAI Conference, and many other professional conferences.

His professional experience and knowledge has been transferred to the Audit Office of the Institutions in the Federation of Bosnia and Herzegovina, where he was appointed as an Auditor General for a term of seven years.