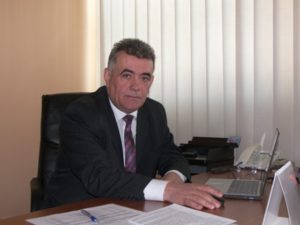 Dragan Kolobarić, Deputy Auditor General of the Audit Office of the Institutions in the Federation of Bosnia and Herzegovina, has a degree in economics and he is a certified internal auditor. He has many years of work experience in finance, and has held many positions in economics, finance and management.

The first years of his employment Mr. Kolobarić has spent as an economist, working for the Ministry of the Interior of Canton 10, where he worked in the field of economic crime. This wass followed by employment in the Financial Police of the Federation of Bosnia and Herzegovina as a financial police inspector.

He holds professional certificates in the field of economics and internal audit, and he has participated in a number of professional symposia and seminars on economics and auditing. Also, he has been a member of Supervisory Boards and Public Sector Audit Committees on several occasions.